One day, Paramasivan along with Parvathi , were passing by on their vahanam . When their shadow was about to touch Thirumazhisai AzhwAr, (AzhwAr an advanced sidha purusha) who was  on some work  notices , moves away. Noticing this PArvathi requests Paramasivanar that they should go and meet him.

He informs Paravathi that Azhwar is a great soul and devotee of SrimanNarayana and he will simply ignore them.

AzhwAr  is  in  trance with Hari vibhuthee and thus not in loukik mood.

Paramasivan  , understands the transcendental state of Azhwar  and asks AzhwAr

AzhwAr offers his Pranaams and replies

“ Adiyen has  nothing to ask you” except Haribhakthi .

Parameshwaran replies That is always there but still  “We want to give you some benediction”.

Swamy  “I dont want anything from you”.

But Paramasivan insists and advises You may ask for whatever you desire”.

AzhwAr with a smile  replies , In that case … “Can you give me mOksham?”.

Paramasivan replies  “I have no authority to give that.

Only srIman nArAyaNan can give that”.

AzhwAr then asks “Can you postpone the death of some one?” for which Parama Siva replies “That is based on the individual’s karmA.

I have no control over that”.

AzhwAr then shows a needle and thread and asks  Paramasivan   “Can you send this thread into the needle?”.

Paramasivan wants the world to know about this great devotee of Sriman Narayana and thus he pretends  being  angry and declares that he will burn him down like he burnt kAma dhEvan.

AzhwAr  retaliates  meditating on SrimanNarayana . A  great fire flows from both the directions . Parama Sivan unable to bear the heat of that fire from AzhwAr , at once surrenders to  Lord  srIman nArAyaNan, and all the dhEvas, rishis, etc also approach Perumal and request him to stop the chaos.

LORD , immediately orders the praLaya clouds to bring a great rain and when they ask if they have the power to subside AzhwAr’s fire, emperumAn says he will give them the power. 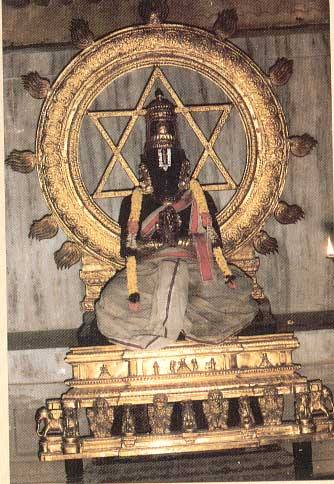 A great flood gets formed after subsiding the fire, and AzhwAr being fixed on LORD continues his meditation without any disturbance.

Paramasivan being amazed at AzhwAr’s nishtai gives him the title “bhakthisArar”, glorifies him and explains to parvathi that “dhurvAsar was punished for his apachAram to ambarIshan. So, bhAgavathas cannot be defeated” and leaves to his place.

Its always a pure devotee who wins by his bhakthee and Lord always proves this repeatedly that HIS bhaktha is dearest to HIM .