O Rama nee naama memi ruchira!
One of his compositions

It is tastier than grapes and tastier than sugar cane juice
Pakshi vahana nee namam emi ruchira
O lord who rides on an eagle (Garuda), you name is so tasty
Anjana thanaya hruth kanja dalamulandu ranjillu
O Rama, your name resides in the petals of a lotus flower which is the heart of Lord Hanuman who is the son of Anjani
nee namam emi ruchira
Your name is so tasty
Sada sividu madi sada bhajinchedi Sadanamdamagu 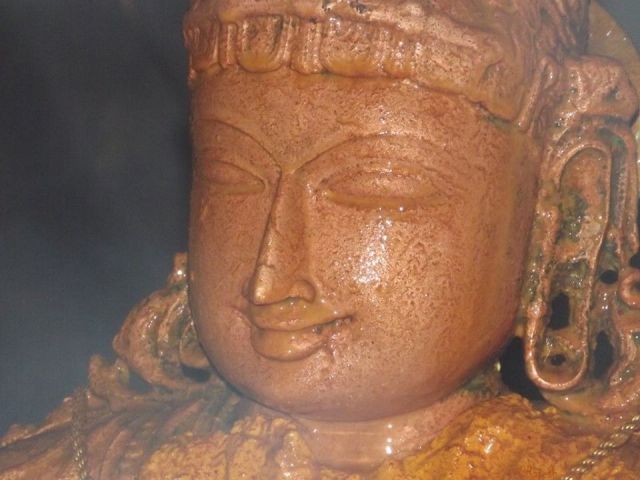 That is what your title is and your name is so tasty
Kari raja Prahlada Dharanija Vibhishanula kachina
Kari raja (Gajendra), Prahlada and Goddess Sita who is the daughter of goddess earth were saved by saying your name
nee namam emi ruchira
your name is very tasty
Kadali Kharjura phala rasamula kadhikamu 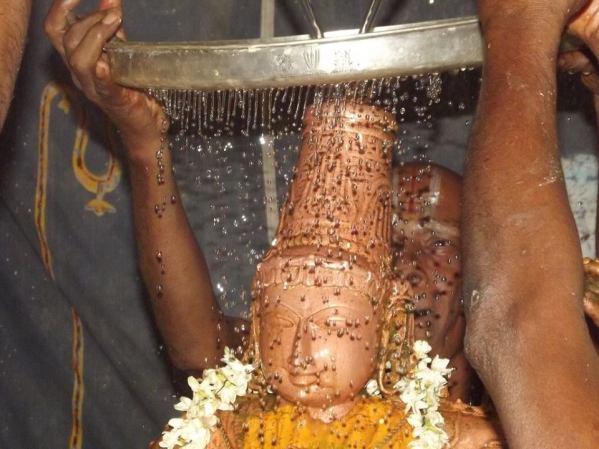 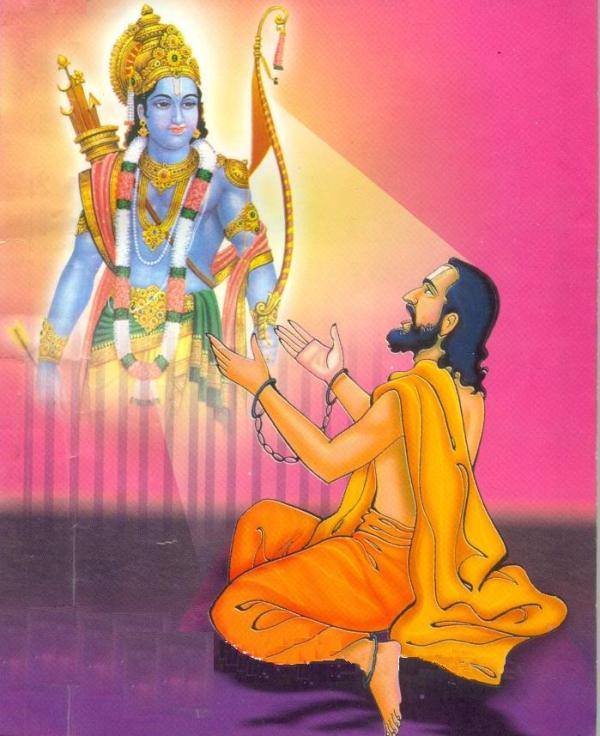 . Ramadas sings this Kirtan calling his Prabhu Rama as a Compassionate one. The hot sun is like the furnace — bound inside the prison cell — he had been whipped severely — he lived for 12 long years in this jail all alone — living in that cell one cannot know if it was day or night —

What deep love (‘priyam’) must he have possessed for Rama?

He built the temple for Rama.

But he was imprisoned and whipped frequently.

And he sang, ‘Oh! Rama! I cannot bear Your Grace!’ — ‘Deenadayalo! Deenadayalo!’

The depth of his worship is seen in that with his fingernails he has carved on the rocky wall of the prison the form of Lord Rama, Sita, Lakshmana and Hanuman.

He started  worshipping these deities . The prison is still to be seen in Golconda (near Hyderabad) and one gets to see this carving of Ramadas even today!

Ramadas has written about 16000 Kritis on Lord Rama though what we know and sing is much less.

All the 16000 Kritis of Ramadas have been painted on wooden boards and hung on the marble walls in a ‘dhyana mandap’ built by the Government in memory of the great Rama Bhakta.

At the entrance of this mandap is a big statute of Ramadas in the attire of a Diwan while outside on top of the entrance wall is a small statue as the humble servant of the Lord!

4 thoughts on “Oh ! Rama…. How tasty is your name? Bhaktha Ramdas relishes in his kirtan”