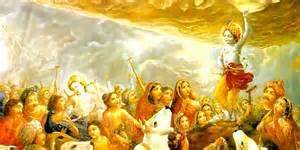 Goverdhan, a small yet developed town  forms part of Braj bhoomi which is spread over 42 kosas on each side.  Braj bhoomi comprises of Mathura, Vrindavan, Gokulam, Nandgaon, Barsana , Goverdhan and surrounding forests.  The nearest railway station is Mathura enroute to Delhi.

Goverdhanagiri , more popularly addressed as “GIRIRAJ GOVERDHAN” is situated in the middle of the town Goverdhan which  is 24 kms from Vrindavan and approximately 26 kms west of Mathura. The routes to Vrindavan and Goverdhan from Mathura are different . Autos charge app. Rs 300/-to go to Goverdhan from Vrindavan.  Many buses and share autos ply to Goverdhanagiri from Mathura and Vrindavan round the clock. Radha Kund, Shyam Kund and Manasi Ganga are in the precints of the hill. This is considered as the most sacred place like Vrindavan . 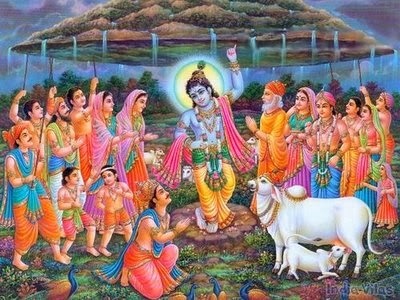 APPEARANCE OF GOVERDHAN HILL :- In Satya yugam, the first yugam , Pulastya Muni approached Vindhya Hills, the king of mountains to give his son Goverdhana to him. The rishi desired to take the mountain to Kashi and do meditation sitting on it.   When the mountain was reluctant, the sage was annoyed and was about to curse it.  At that time, his son Goverdhana intervened and expressed his willingness to accompany the rishi on the condition that the rishi should not put him down until he reaches the destination and in case the rishi, for any reason, places him down, he would not move from that place.  The sage agreed to this condition and with his spiritual powers carried the hill from Vindhyas. When it was dusk, the rishi placed the hill to offer evening oblations. After finishing his rituals, when the rishi tried to lift the hill, he could not do so.   Goverdhana reminded him of the condition and said that it would continue to be in the same place.  The annoyed rishi cursed the hill that it would shrink by the size of a  mustard seed every day.   As per the scriptures, 5000 years ago during Krishna avataram, Goverdhana hill was about 29 km high, 115 kms long and 72 kms wide.  Now the hill is only 80 feet high at its highest point and at some places it is in the ground level. The circumference is  25 km.

Goverdhana giri is considered superior to even Himalayas because it has  Krishna’s association as the Lord chose Goverdhana giri for HIS various pastimes. Because of this, the hill earned the name as “GIRIRAJ”-king of mountains though it is very small compared to Himalayas .

Of all the devotees , Goverdhana Hill is the best because it supplies  Krishna and Balarama with all types of necessities. In Srimad Bhagavatham,  the Lord mentions  that HE and Goverdhanagiri are identical.  Krishna used to go to Goverdhanagiri from Vrindavan for gazing cows and would visit the nearby forests with HIS friends.  (I wonder how   Krishna walked 50 kms to and fro everyday from Vrindavan to Goverdhan without footwear . This makes me recollect Periazhwar’s pasurams in Yasodha bhaavam “Naalai thottu kandrin pin pogale ,kolam seidhu ingey  iru….” ., azhwar’s feelings when he expresses mother’s anguish to see her child returning from forest without slippers and umbrella.)  . 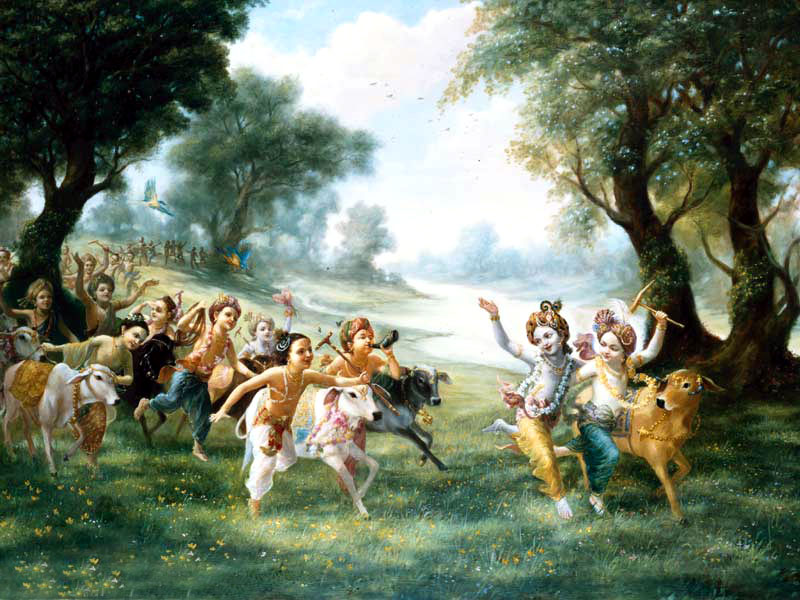 Krishna and Goverdhana shilas are identical and devotees used to bring these shilas for worship. However, in order to preserve the hill which is diminishing in size due to Pulastya rishi’s curse(mentioned in the sthalapuranam below), fencing around the hill is done and  devotees are  requested to refrain from taking the shilas.  However, we are told that in case anyone who is desperate to have the shila in the altar must donate equal weight of gold to the Brajvasis and after offering sincere prayers, take the shila. As per scriptures, the hill doesn’t like to leave the holy dhaam and it is better not to commit any bhagavatha apacharam by distancing the sacred hill from Lord’s services .

As   Krishna Himself did parikrama to the hill and as He mentioned that both are identical, devotees in huge numbers  perform parikrama ( pradikshana ) to this sacred hill with sincerity and devotion even today  . On Ekadashis and during the months of Sravana and Karthika, devotees throng to do pradakshinam. Many devotees do “Dandavat pranams” around the hill!!!!

It was customary for the gopas headed by Nanda Maharaja to perform yaagam to please Indra, the king of devas and give their offerings as they felt that Indra was responsible for rains.    Little Krishna ,who  was 7 years old convinced elders that Indra was only doing duties assigned to him and there was no necessity to worship demigods. The  Lord added that  Goverdhanagiri was providing with their daily requirements including enough grass to the cows which in turn yielded good milk resulting in their prosperity.   Chinni Krishna suggested that instead of Indra,  brahmins, cows and  Goverdhanagiri have to be worshipped to which the elders agreed.   On the day of pooja, all the gopas and gopikas  performed GOPUJA (pooja for cows), offered dakshinai to Brahmins, circumbulated the hill and offered huge quantities of various food items to the hill.   On Krishna’s order, everyone closed their eyes while food was being offered.  Krishna assumed a great transcendental form like that of the mountain,declaring that HE was Goverdhana Hill and accepted all their offerings while little Krishna stood beside his parents and offered prayers to the mountain which was HIMSELF  .  HE announced that Goverdhana Hill is non-different from HIM. Later when the gopas were asked to open their eyes, they were surprised to see the palates empty and were convinced  by  Krishna that the mountain had accepted their offerings.  The gopas returned happily.

Indra was furious and could not tolerate this humility. There was heavy downpour of rain followed by thunder and storm.  The gopas approached  Krishna for help.  The Lord  who is Bhakta vatsalan- lifted the Goverdhana Hill with HIS little finger on HIS left hand like an umbrella and all the gopas with their cattle took shelter of the .  The inhabitants of Vrindavana along with their animals remained there for one week without being disturbed by hunger, thirst or any other discomfort. 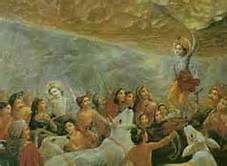 Seeing the extraordinary powers of Krishna, Indra was baffled in his determination and was humbled. He approached the  Lord with Surabhi cow, begged for forgiveness for his ignorance and performed milk abhishekam to the Lord  . 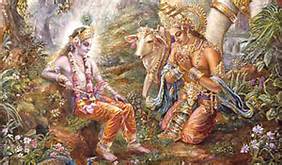 He praised the Lord  as “GOVINDA”- the protector of cows and did Govindabhishekam.   The water poured over Krishna for abhishekam got collected in a nearby pond which is known as Govind Kund.

As Goverdhanagiri had the fortune to be held by the Lord  , the hill is known as “Giriraj”- the king of all mountains.

To commemorate the above incident,  Krishna’s great grandson Vajranabha constructed a temple for the Lord.

Even today, on the following day after Deepavali, Annakoota festival is celebrated at Goverdhanagiri and at Nathdwara.  Devotees throng from far and wide to participate in this puja along with the local devotees who gather from the neighbouring villages.  Vehicular traffic is stopped during this time.  It is customary to make very huge offerings of various types of food (usually chappan bhog comprising of 56 items) , do puja to Giriraj and distribute the prashadam to the assembled devotees.  Devotees bring carts load of food items to be offered to Giriraj . 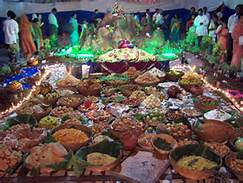 Our Car driver, Shri.Vishnu who is a Brajvasi, pointed out to a dried cow dung human figure and informed about the prevailing custom.

Those who are not able to make it to the actual place, assemble in their respective villages and make a huge human figure of Giriraj from dried  cowdung  and fill it with various delicacies. Puja is performed. Chapan bhog is offered to Giriraj.   Milk is poured in the navel and the most eligible marriageable bachelor is forcibly dipped into the navel.  RElatives surround him and make fun of him.  It is  their belief that the boy would get married immediately. 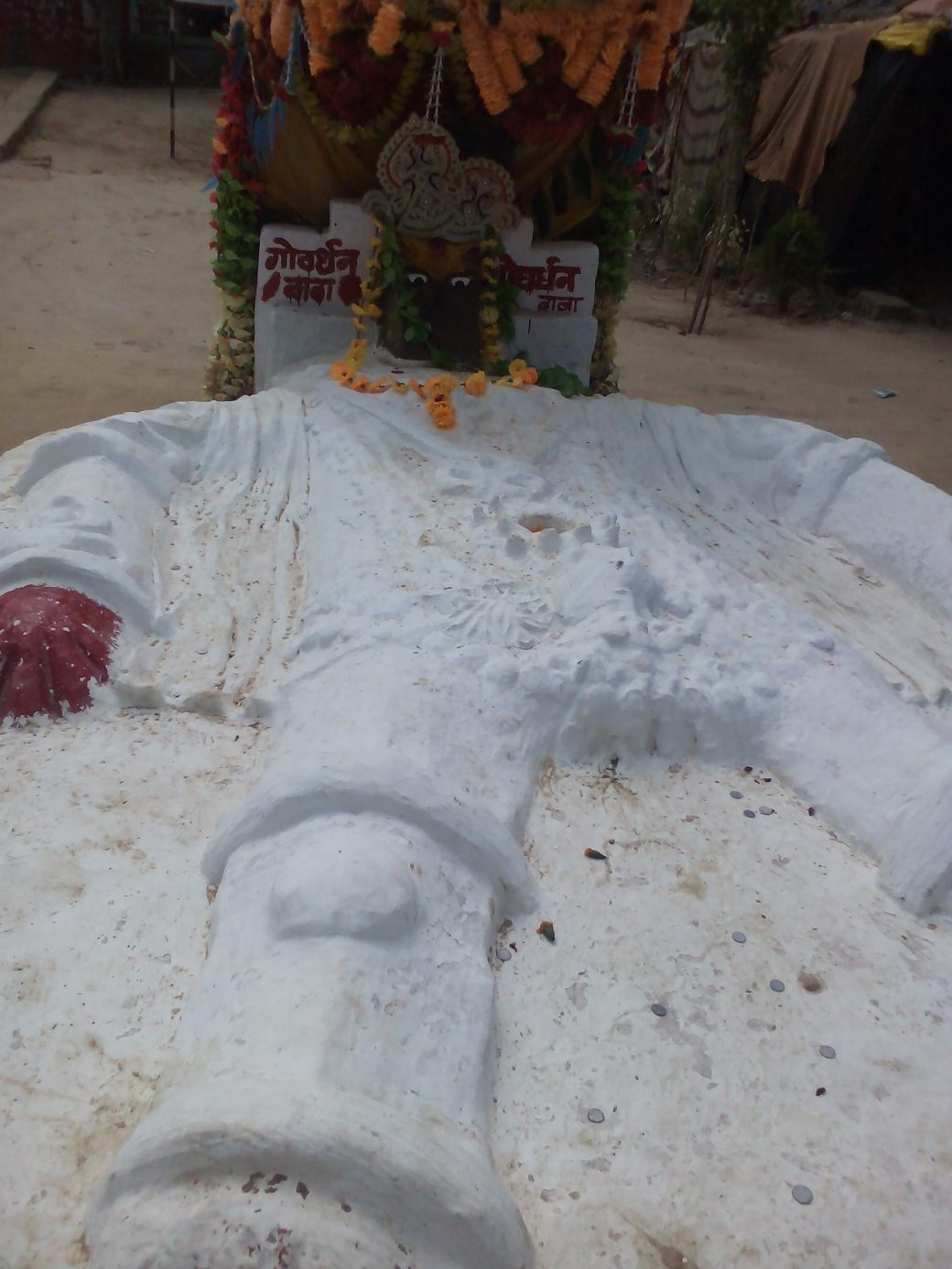 Many of these places are not on the parikrama path but located around Goverdhan.  These temples can be visited in a day by taking a vehicle and the parikrama around the path can be done by walk separately.

To visit all these places would take 3days. If one does parikrama in the night, he may not be able to visit few temples as it would be closed.

Details of Goverdhana giri and the surrounding places would be shared in the forthcoming posts. 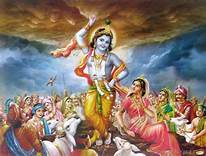 Deepavalee has special significance for all vaishnavas . On the fourth day of the five day Diwali festival Sri Goverdhana Puja and Annakoot Utsavam is celebrated in Vrindavan  amidst chanting of “Giriraj Dharan ki Jai” (Glory to the lord who lifted Goverdhan on his  little  finger) reverberates . 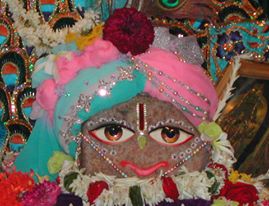 As per Srimad Bhagwatam Lord was lifting the huge Sri Goverdhan Parvat for seven days  continously prior to Diwali,  and rested him back  on earth & asked the citizens to worship the  holy mountain. 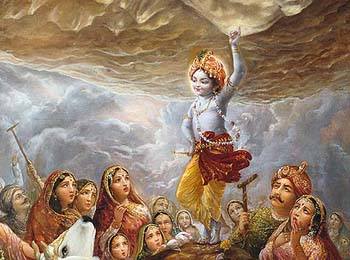 Lord Krishna , then appeared in two forms. One as Sri Goverdhan hillock itself, i.e., deity to be worshiped and second as resident to offer food to  GIRIRAJ . Thus on this day, the devotees offer their gratitude to Lord Krishna for his blessings in making their lives complete. This holy hill Goverdhanagiri , more popularly addressed as “GIRIRAJ GOVERDHAN” is located in the middle of the town Goverdhan…

One thought on “GOVERDHANA GIRI”