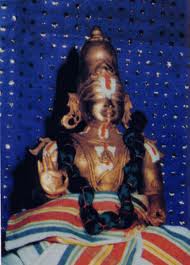 The disciple wanted to know  how  to  identify a srivaishnava  ? Swamy sent his  new  disciple from Srirangam to Tirumala to ascertain from  the great devotee Ananthazhwan as what was  the quality of a srivaishnava . The disciple though bit amused with his Gurus instructions proceeded to Tirumala which took him  almost  a  week to reach the holy place .

Being too hungry he reached the ashram of Sri Anatazhwan  and expected some good hospitality from the intimates there .   The Ashram was full of bhagavathas who were having the prasadam ( Thadiaaradhanai ) . He did not have a proper place to sit along with the guests in honouring the prasadam. He had to wait until everyone finished their prasad which almost took a long time as there were a good number of piligrims who had come to honour the prasadam.