Puranas states that out of many thousands of gopis, sixteen thousand are predominant and among them  108 gopis are very close , eight are still more prominent . Radharani and Candravalli are very  prominent  and  Srimathi Radharani is the most prominent. Because Radharani possesses all the charm and sweetness to attract Lord Krishna .

Braj Bhumi  is the most sacred dham spread over  168 miles-  42 miles on each direction with  Mathura as the center.  The holy place  comprises of Mathura,  Goverdhan, Gokulam Barsana ,Vrindavan and the  surrounding  12 forests.

The Supreme Lord manifested Himself as Lord Krishna along with HIS attendants and enacted various pastimes 5000 years ago in Dwapara yugam which attracts millions of devotees to have darshan of this holy dhaam repeatedly .

Lord Krishnavataaram is the POORNA AVATARAM of  Lord Maha Vishnu. Every inch in this place is  sacred because of its association with  Lord Krishna’s  lotus  feet (as He walked over all these places).

Anyone who visits this sacred place is bestowed with   divine love . This is one  of the seven mukthi tharum kshetrams , the rest being Ayodhya,  Avatnti, Kasi,Kanchi, Puri, Dwarka.  Also, Mathura is very dear to Lord Vishnu as it has Lord’s association in all the four yugams.  Lord eternally resides in this place. 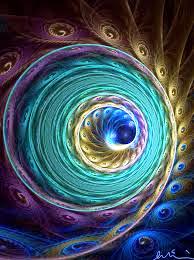 Braj Bhoomi, is spread over a area of around 5,000 square kilometers   spanning Mathura district of Uttar Pradesh, Bharatpur district in Rajasthan and Hodal Subdivision of Palwal Dist. of Haryana. On its northern fringe, Braj Bhoomi starts at a distance of around 115 KMs from the border of India’s capital New Delhi, along the National Highway 2. From New Delhi , Vrindavan and Mathura, the popular townships of Braj are thre to four hours drive (145 Kms) on the Delhi-Agra National Highway  . Vrindavan and Mathura are at a distance of around 10 kilometers along the NH 2.

Lord Sri Krishna lived in Vrindavan upto HIS 10th year and later moved to Mathura to annihilate the demon  Kamsa.  After this episode ,  Lord stayed in Mathura and later shifted to Dwarka.  Though Lord Krishna resided in Dwaraka by constructing a beautiful city in the sea and was served by 16,108 wives and innumerable assistants,

HIS HEART ALWAYS CRAVED FOR THE GOPIKAS AFFECTION IN VRINDAVAN.

The Lord was physically present in Dwaraka but always resided permanently in the hearts of the Gopis and Gopikas of Vrindavan. 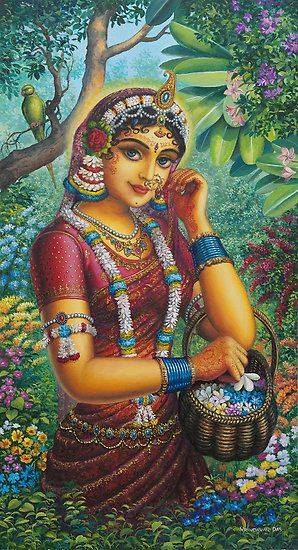 Of the 16,108 wives of Lord Krishna, eight are more prominent who are collectively known as Ashta mahishis.  They are  Rukmini, Sathyabama, Jambhavati, Kalindhi, Mithravindha, Sathya, Badra and Lakshmana. Likewise, out of lakhs of gopis in Vrindavan, eight gopikas(Ashta sakhis) along with Radharani are very prominent.

The Eight Gopis who are the foremost, dearest and most beloved friends of Shri  Shri Radharani  are  glorified  as Asta-sakhis  Gopis . Their names are Lalita, Visakha, Chitralekha, Champakalata, Tungavidya, Indulekha, Rangadevi and Sudevi.

Radharani was always surrounded and served by her thousands of gopi-friends out of which eight of them are very prominent and are collectively known as Ashta sakhis.  They are Lalitha , Vishaka, Tungadevi, Rangadevi, Indulekha, Chitralekha, Sudevi and Champakalatha.  These sakhis appeared in different villages around Barsana. 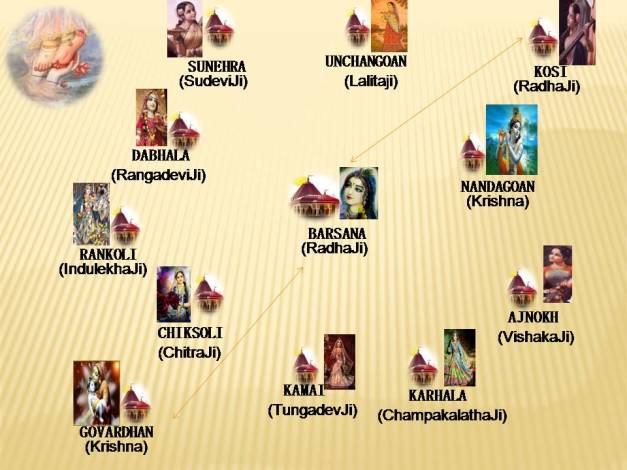 These sakhis individually had many assistants under them for serving Radha Krishna. Few of them are elder to Radharani and others are younger to Radha. 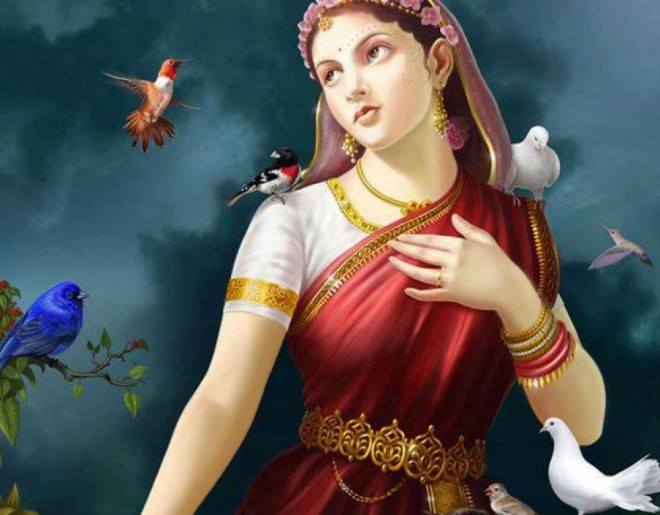 and return to Barsana to take Delhi route to visit Indulekha, Vishaka and Champakalatha temples

Sudevi, the twin sister of Rangadevi is the last among the ashta sakhis.  Goddess  temple is  located at Sunhera village about 5 kms from  Barsana and about 2 kms from Oonchagaon.  She was  born to Rangasara and Karuna on Bhadrapad maas Chathurdhasi thiti (one day before Pournami and 7 days after Radharani’s appearance day and  was always engaged in the devotional service.

She used to decorate Radharani with flowers, apply kajal and chandan to RAdharani and was an expert in massaging the transcendental body of Srimati RAdharani, apply mehendi on Radharani’s feet.   She used to dress up RAdharani so beautifully that even Krishna used to say that HE is  incompetent and not capable in dressing up Radharani!! like Sudevi

She was  an expert in training parrots . By training them to repeat Krishna’s names  she used to   console Radharani from the pangs of separation from Krishna.

She was good at reading omens and predictions .  She was also good at gardening and ensured that choicest flowers bloomed to decorate Srimati Radharani.

Links to other  Ashta sakhis