Once the revered Acharyar Nadathoor Azhwan was on the way to  a nearby temple . He met a learned srivaishnava friend who had  come to  accompany Azhwan upto the  temple . En route they were discussing  the  divine experiences of Azhwars and Poorvacharyas .

Suddenly they  came across  another srivaishnava with Tilak but was belonging to a lower caste . As was the custom those days on seeing the two revered Acharyas he moved to  another side of the road and waited obediently for them to leave .

The learned vaishnava friend  who was accompanying Azhwan  looked at the passerby and started shouting at him for trespassing …….. and  was too harsh on him ….. 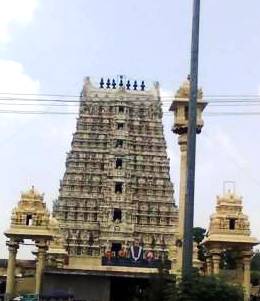 Nadadoor Azhwan who heard his  shouts , fell down in a swoon . He was brought back to consciousness  . The learned Vaishnava asked Azhwan………………. If his health was fine and why did he swoon ?