Lord continued “Language is no barrier to Bhakti”. Bhattadri went to Poonthanam’s house and apologized for the offense

Chinni  Krishna is  worshipped  at  Guruvayur temple in  Kerala  for ages.

HE  is the same    LORD  whom  Vasudeva worshipped as per  the puranas  at  Mathura. The holy town of Mathura has the presence of Lord Sri Hari always. 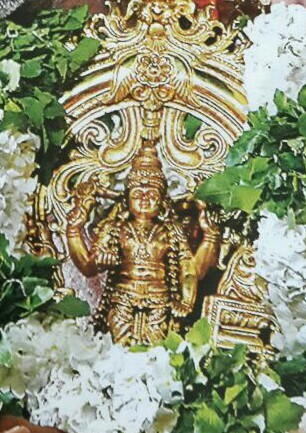 Chinni Krishna who  graces us  in Guruvayur was originally   at Adikeshava temple before arriving to Guruvayur.

It is verily the  Aradhanai performed to  Chinni  Krishna that Lord  appeared  to Vasudeva and Devaki. In other words, the Guruvayur  Chinni Krishna bestowed us with Lord Sri Krishna ,  Srimad Bhagavatam and Narayaneeyam .

Vasudeva continued  worshipping  this LORD  in Adikeshava temple along with chinni krishna .   It was during Jarasandha adventure , the denizens of Mathura along with  Lord Krishna vacated Mathura and settled in Dwaraka .

Vasudeva couldn’t part with  Lord Adikeshava  .  Hence he took the Lordships  along with him  to Dwaraka and established a temple for his worship…