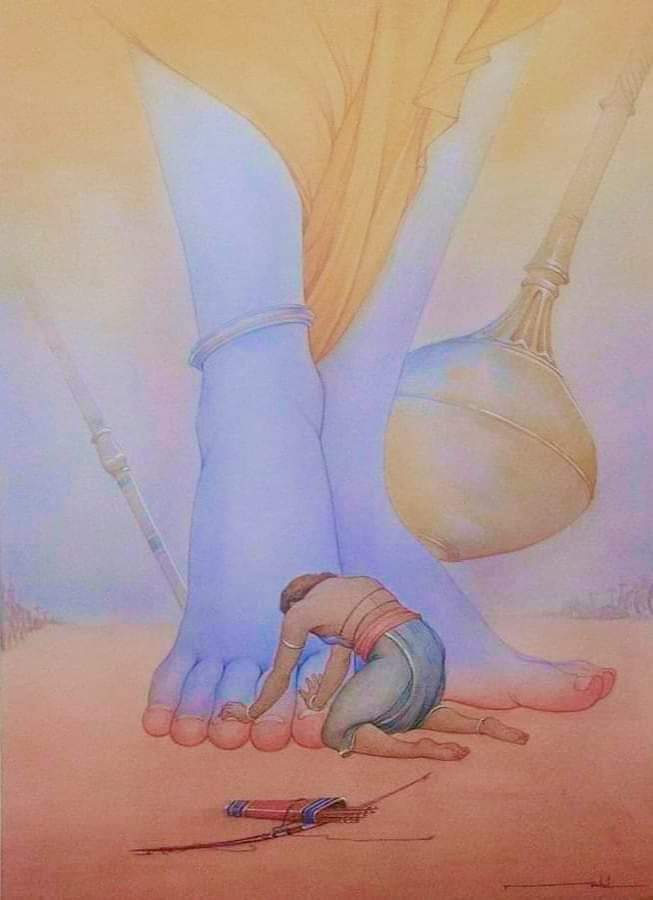 Few hundred years ago at Sri Rangam , One day, Swamy  Nampillai  along with his disciples were walking on the shores of Cauvery river . They saw some boys playing on the banks of the river .The boys were building houses of sand. They divided their sand houses into different portions and said one was the living room, one was the dining room, one was the kitchen and so on. One of the boys pretended to be a mother. Another acted as a father, and a few others were as children.

Swamy Nampillai watched them while they played. After some time, the boys demolished the houses of sand, which they had built, and began to play some other game.

Swamy Nampillai  walked towards them, and said My children …

“You were so long playing the roles of father, mother, children etc. But now, suddenly, you have forgotten those roles.”

The children innocently said, Swamy We are bored with that game hence “Now we are playing a new game, and so our roles have changed.”

Swamy  Nampillai used this simple game and explained his disciples to explain how, in life, we merely play roles. A person is daughter to someone, wife to someone, mother to someone. But when life ends, all this comes to an end, in the same way that all the role playing of the children ended. That being the case, is attachment to people or things in life justified? Our attachment must be only to Lord Narayana, for there is none equal to or superior to Him. This is what the Upanishadic statement,

Ekam eva adviteeyam, stresses. LORD remains the only constant, and we must focus on Him

Ekam= The One; Eva= only; Advitiyam= without a Second

One disciple said “Swamin, all vaishnavas say in one voice that all celestial beings other than Lord Sriman Narayana are not to be worshipped.  But are they not worshiping them in their daily rituals during Sandhyavandana and Amavasya tharpanam , Grahana (eclipse) tarpana as prescribed in sastras.  What is wrong in worshiping these deities in their respective temples dedicated to them?”

“Though the fire in Agnihotra (the daily fire worship ritual) and the fire used for cremating the corpse in the crematorium are one and the same, the former one is considered to be holy and the latter one unholy.

Same is the case with the worship of the deities prescribed in the veda sastras and divinities consecrated in their respective temples. The underline is upaya and upeya in performing the act .

Having absolute faith in Acharya and Supreme Lord Narayana is a very strong appetite for the covetable virtues of the Lord are the most requisite essential qualities of a Sri Vaishnava which would ensure him liberation from worldly bondage at the end of his life.

As they were walking on the shores one disciple requested Swamy to brief about the Sri Vaishnava Sampradaya on which all could repose their confidence.  Swamy looked at the shores and imagined the sea shores and told them My children Please remember always “The magnificent sea shore”.

Surprised at this answer, the disciples exclaimed, Swamy “Are we expected to remember the sandy hillocks and huge regions on this sandy seashore?” Swamy Nampillai smiled and said , My child Lord Rama accompanied by a huge host of monkey army encamped on the sea shore before crossing it.

The night came.  As all the monkeys were very much attached to HIM , they kept a close watch over securing his safety even at the cost of their lives.  Lord Rama slept while the monkeys were keeping awake and guarding him.  As the night darkened , Lord woke up and saw the little monkeys had gone to sleep in their own position .Lord along with his brother, Lakshmana fastened the quiver at the back of their shoulders, strung the bow and holding the sharp arrow in their hands, went round the entire army of vanaras throughout the night in order to ward off any catastrophe that may befall on them.  This proves that there is no other protector except Lord Sri Rama.  This is what you have to remember always.”