” TIRUMALA is most holy shrine and Lord Vaikuntanathan out of abundant mercy has appeared as Lord Venkateshwara in this yuga for our upliftment .

. Before  seeking to  have  darsanam of LORD ,  the devotees  are  supposed to shed  the    inherent tamasic  qualities and approach with  sattva gunam for  HIS darshanam .

Elders advise us to  reach the foot of the  Tirumala Hills and have a holy dip at Azhwar Theertham presently called as Kapila Theertham  before ascending the Hills.

This divine place is located enroute to Tirumala .  Out of the   1008 theerthams  located in and around  TIRUMALA  HILLS , Azhwar  Theertham ( Kapila Theertham)   is the only  natural spring  located  at the foot of the Hills.

On the shores of Alwar theertham is  enshrined Sri Lakshmi Narayana Perumal gracing the devotees . Lord  is gracing with goddess  Sri maha Lakshmi . On the other side we can  have darshan of  Lord Venugopala Swamy..

It is believed that this holy water  springs source is   from  Lord’s  lotus feet and hence is considered to be very sacred.

Near the water falls  of  Azhwar Theertham  there is a  small temple of  Swamy Nammazhwar .

Further ahead we see a small cave. Many years back,  this region was ruled by Emperor Thondaiman, who  used to visit Tirumala daily. 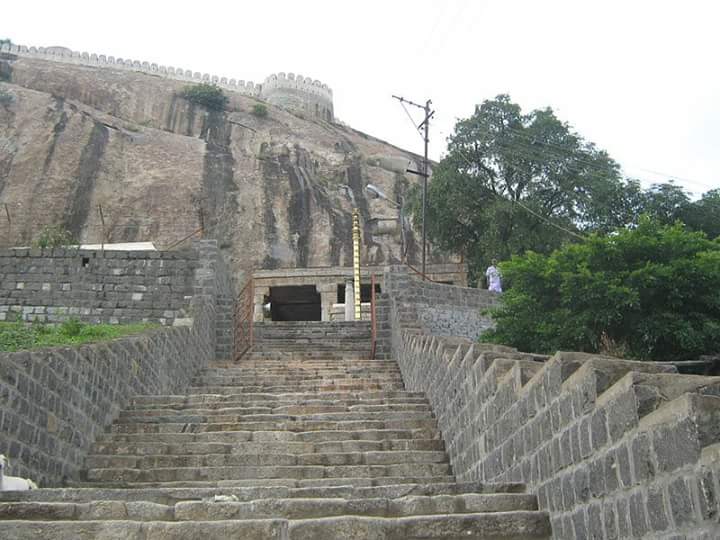 Since it was difficult to cross all the Seven hills in the normal way, it is believed that  the Lord had shown him a shorter route  to reach him via this  cave!

It is  said  that there was a  temple  for Lord Sri Narasimha inside the cave .

Presently ,  the Azhwar Theertham is known as Kapila Theertham .This place is glorified for the Paramasiva temple  installed by  Kapila Rishi  and hence the name  Kapileswara.

This wonderful temple is  one and half miles from Tirupati.

It is also said ,during  the ‘Kartika’ month  on the ‘Purnima’ (full moon) day,  many locals assemble to have darshan of Azhwars and Paramasivan

In the Tamil DivyaPrabhandam sree sookthee Azhwars have sung  around 202 divine pasurams on LORDSHIPS   . 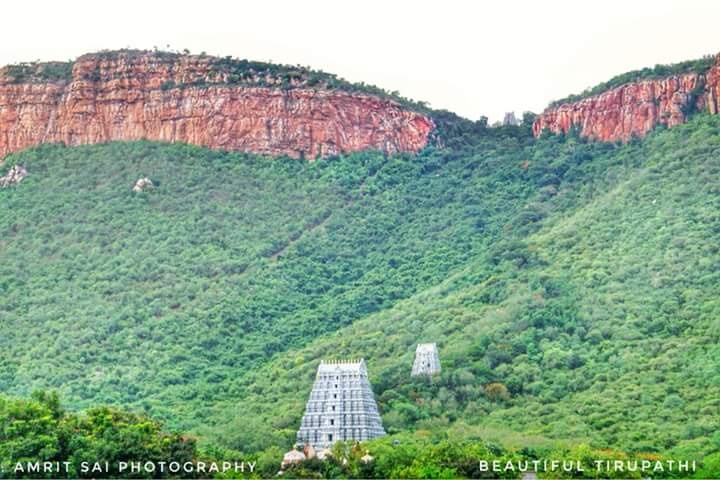 By  having a holy dip in Azhwar Theertham,  the devotee  gets purified physically

This is similar to our journey to Sri Vaikuntam. It is explained in detail  about  the journey in the Archaradhi gadhi, that enroute the  jiva atma  has a purificatory dip in Viraja Nadhi .

As Tirumala is  Bhooloka  Vaikuntam,  Alwar Theertham is like Viraja river  and so it would be appropriate to take a holy dip  here before we have darshan  of LORD up hills!

By doing so, the soul sheds the  Tamo and Rajo  gunam and proceeds to Alipiri, the foot of the Hills.

Trekking  up the holy  hills  is considered to be very sacred.

Recalling the inner meanings of the Azhwars divya prabhandam and Acharyars  who have glorified the Holy Hills in their outpourings one  treks with reverence to have LORD’s darshan ..

All animate and inanimate beings on the Hills are  worship able on this sacred Hills  .

A view of the sacred  hill from the   footpath at Alipiri is seen to be believed.

As the summit opens into a spacious, charming valley, the range of the  splendour breaks through several outlets like fantastically shaped rocks in the form of serpentine roads.

The flora and fauna on  the Holy Hills  provide an example of a perfect ecological balance by nature.

The imposing chain of seven hills extending in curves with its intermediate ranges and ridges  resembles the divine serpent, Adisesha.

It is mentioned in Sri Venkatesa Suprabhatam, the range of 7 hills are  celebrated   as Seshalam, Garudachalam, Venkatadri, Narayanadri, Vrishabhadri, Anjanadri, Neeladri  and represents the great serpent bed

As per Upanishads ,  in brief  the Jeevatma passes through five stages in its spiritual evolution , namely, Annamayya  kosa , Pranamaya kosa , Manomaya kosa  Vignanamaya  and Anandamaya kosams.

After a  holy dip  and blessings  of Swamy Nammazhwar  he   ascends the holy hills  in the  Pranamaya stage on  to the Hills.

Once he  reaches the Mokaala Parvatham (the knee breaking ascent )  with abundant mercy  he moves  into Manaomaya kosam and  with serious quest to seek LORD from  heart and the mind he approaches JagathAcharyar Swamy Ramanujar  shrine . ( The appended post describes about this ancient temple )

The darshan enlightens  him with knowledge  of the  real relationship between prakruti,  jeevatma and Paramatma  .

With the  blessings of Swamy Ramanuja he   reaches the  sacred hills .

He is advised to take a dip in Swami Pushkarini near the temple. From here he gets inspiration and seeks the lotus feet of Lord Varaha  ( Gnana Piran) (Sri Bhoovaraha Swami ) and gets  further enlightened  thus the  the Vignanamaya kosa is activated .

The final stage is reached when he  seeks union with the supreme  Lord  our  Lord  Venkateshwara  in the Aananda nilaya vimanam.

When Anandam( bliss )  takes possession of the soul, there is no further need for  any desire other than reaching his lotus feet permanently ……

The great devotee Annamaya submits to the LORD in this appended kirtana a jivas struggle to reach HIS lotus feet … Check the meanings too in this clip
https://www.youtube.com/watch?v=L7beQYyXk4M

12 thoughts on “Azhwar Theertham at Tirupati”