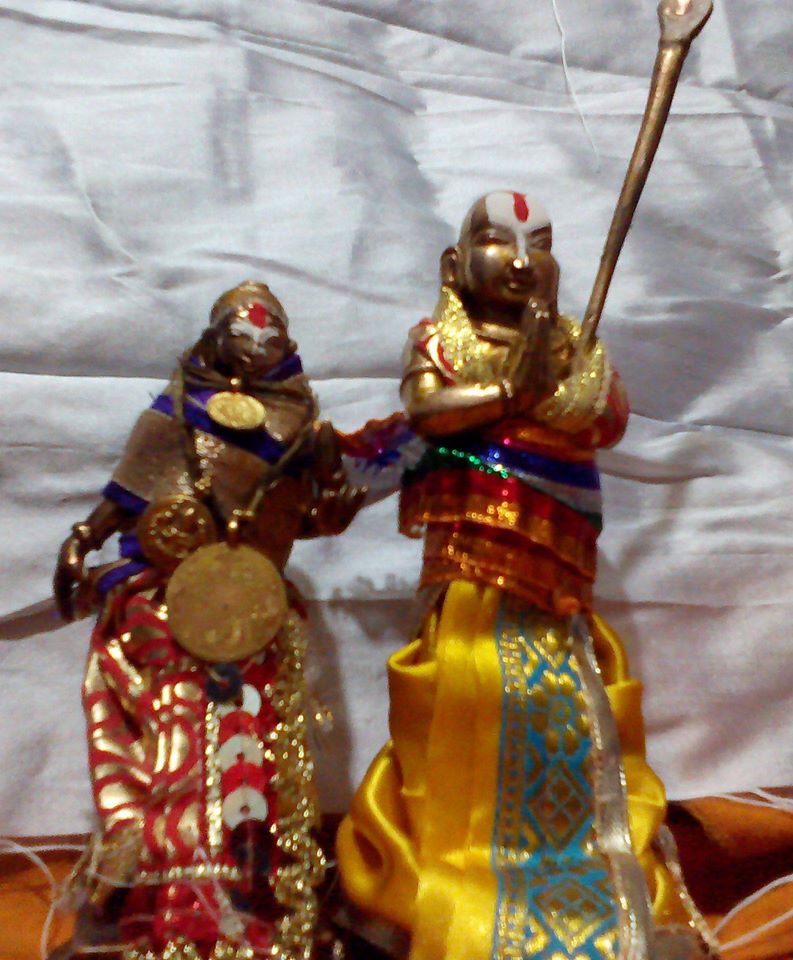 Near  to  Seerkazhee in Tamilnadu , there lived a patriotic Army General of  ChozhA king who earned the king’s goodwill and respect with his devoted work.He and his wife, vallitthiru were blessed with a beautiful male child, whom they named Neelan , due to his dark (neela mEga) colour.

Neelan appeared during  ( November-December ) karthiigai mAsam, kritigai nakshathram on a full moon day. He  was an incarnation of the Lord’s SArngam (Divine bow).

Neelan grew up as a shrewd smart boy, learning Tamizh and Sanskrit and mastered them . He became well versed in sword fight , Horse riding, elephant riding all the traits needed for a soldier . He grew up  into a young, intelligent, smart, healthy,strong, handsome lad (and yet simple and modest with a religious mind like his parents) .Not surprisingly,  the countrymen  liked him . As Neelans father got old, the chOzhA king, having heard about Neelan, appointed  his son as the Army general .

He was agile, dynamic, young and good at battle fields; and hence captured the neighboring states with tact.

The king was immensely pleased and presented him a small portion of his kingdom, a place called Thirumangai, as a tribute and made him a KING!

(He was thereafter called “Thirumangai mannan”.)

That was his first success. And that became the cause for his slipping from all bhakti, devotion, religion etc., and the success of reaching the  at such a young age   went to his head .He took to all vices  deeply caught in seeking sensual pleasures. The parents were helpless and could do nothing but to  pray  Lord to correct their son. All compassionate Lord Sriman nArAyaNA did listen to them.

He had organised such a situation that made a dEvamAdhu by name sumangalai(who was performing the kainkaryam of fanning(sAmaram)the Lord  to appear as the most beautiful daughter of a local doctor in Tirumangai, in the name “kumudhavalli” (based on a curse ( “sApam”)  given by kapila muni for her laughing at an ugly face and coarse voice of his disciple.

Being an incarnate of dEvamAdhu, she was exquisitely pretty and could attract even a recluse.Our “new” king, Thirumangai mannan heard of her alluringly feminine beauty and wished to see her immediately. When he saw her, he was so much captivated by her darting glance at him, he fell head over heels for her and proposed to marry her. Kumudhavalli, through her father, stipulated two pre requisites for him to qualify for marrying her. 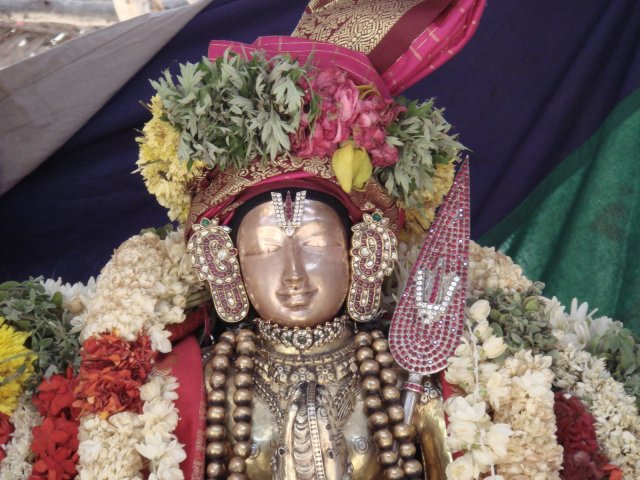 1) Her husband should be a (or become a) Sri vaishNavA,

wear  ( Tilak ) ThirunaNkAppu on his forehead,

and be a true bhaktA of Sriman NarayaNan.

(Sriman Narayanan Himself spoke through her)

2. Her husband should feed daily 1000 (ONE THOUSAND!) sri vaishNava devotees with Prasadam.

Our mannan, being intoxicated by her looks, agreed after listening to her conditions immediately.

So there he was.

With a bright ThirumaNkAppu, thuLasi mAlai, he paid obeisance to LORD Sriman NarayaNa.

He started the annadhAnam for 1000 Sri vaishNava bhaktALs.

Slowly day by day, our mannan was transferring into a true, sincere devotee of the Lord and was getting tremendous satisfaction from feeding Sri vaishNavas daily.

The enjoyment of Bhakti and BhagavatOttamAL sEvai were really experienced by Thirumangai mannan.

While this was going on, the entire treasury was spent on the AnnadhAnam kainkaryam. He could not even send the “tax” which he was supposed to send to the chOzhA king every year.

So, chOzhA King sent a message to him asking him pay the taxes that was collected  but since our mannan could not pay and sent back a reply saying that he will not be able to pay. ChOzhA king got wild and sent soldiers to bring him.

Our hero sent them back effortlessly with his fighting skills. ChOzhA king himself came with a heavy army and attacked Thirumangai mannan.

Even though Thirumangai mannan’s army was small, he fought and won the battle. His horse went near the chOzhA king and he got down from the horse.

He said: “Oh pErarasE (Big king!), I did not send the tax- I don’t deny. But did I spend the money on trivial matters?

It was spent for Sri VaishNavALs.

How can I stop when your soldiers came to imprison me?”. Our chOzhA king was hurt due to his defeat and did not listen to all this.

He said,”I made you a king. I gave you all these luxuries.

Now you are not even grateful. and you fought with me, too”

Our mannan got hurt very badly by that “ungrateful” statement.

He was very much grateful to chOzhA king for all that he had done.

So Thirumangai mannan threw away his sword and bowed down before the king and said ” Chozha mannA!

Am I ungrateful? was not these kingdoms which I captured for you.

Now I am standing in front of you as the same neelan .

Go ahead and do what you wish to do with me”.

The chOzhA king melted and was moved.

He hugged thirumangaimannan and said “Don’t worry. I know you.

But we should pay respects to pErarasar-chitRarsar relation and hence, you are to send your tax within 3 days.

Till then, you will be imprisoned in the perumAL temple.”

There was no way he could get any money and hence, he begged the Lord to help him.

The Lord appeared in his dream and suggested him to go to the banks of river vEdhavathi near kanchi where he could find a big treasure of Gold coins and jewels.

He narrated the dream to the chOzhA king and Thirumangaimannan and few ministers went to kanchi, vEdhavathi river banks and did find a BIG TREASURE.

Having heard this news, chOzhA king got up from the throne and whole heartedly bowed down to Thirumangai mannan for his bhakti and thee Lord’s mercy on him.

He said” I have done a great mistake of taxing a great bhakthA for a small tax issue and caused ahindrance to BhagavathALs’ anna dhAna kankaryam. Please take all this treasure and let me send you back with full Royal honours. You need not insult me by paying the tax any more!”.

The mannan came back with more wealth and with great honours. The citizens of Thirumangai were greatly thrilled by their king and kumudhavalli was proud of her husband.

They revived their kainkaryam for 1000 Sri VaishNanvALs more aggressively and attained their happiness and satisfaction as usual.

Again, they found themselves left with no wealth for the kainkaryam.

With a view to keeping the promise to his beloved wife, he had to resort to highway robbery from rich people. With the booty, he continued the kainkaryam.

One day The Lord Sriya: patih Sriman NarayaNan and Vishnu pathni Sri MahAlakshmi appeared on the highway as a”just married” couple with lots and lots of jewels adorned them.

Our mannan turned robber heard of a new rich young couple’s coming on the Highway and immediately rushed with his adiyALs.

He was very happy to see them with so many jewels and thanked God(!) for that. They also had a bag containing more ornaments.

Our Neelan demanded them to surrender all they had.

They did precisely what was instructed to them; all with their katAksham on our hero. They put all their ornaments on a piece of cloth.

When Thirumangai mannan tried to lift the bundle of ornaments he just could not even move it a bit! He was shocked and perplexed as to why it was so difficult to move it! He went near the bridegroom ,Lord Sri mahAvishNu and with a fierce look into His eyes, asked Him ” What is the manthram you have for lifting this bundle?.

Tell me, else, I will kill you both.” He threatened them with a sword. The Lord and the PirAtti smiled with a gentle mandhahAsam.

He asked Thirumangai mannan to come near Him AND WHISPERED IN HIS RIGHT EAR ” THE ASHTAAKSHARI “.

Having heard those EIGHT SYALLABLES (AshtAksharam) MANTRA right from none other than LORD ( SRIYA: PATHI HIMSELF ) his mind, his heart became PURE!. All his dirt had disappeared! He was simply electrified by the AshtAksharam.

He got goose pimples all over his body;

He got indescribable blissful happiness! He prostrated fully at Their Lotus feet with eyes full of tears at their mercy to bless him despite his shortcomings and negative qualities. They blessed him with Their KARUNAI KATAAKSHAM..

He realised His ThiruviLaiyAdal and the purpose of his birth and poured out tamizh pAsurams on the Lord as if it comes from just opened dam  He looked at the sky and kept on crying ceaselessly for their dayA on his lowly self. His hands and the legs were shivering with tremendous amount of bhakti and love for the Lord.

He came back galloping on his horse named ADALMAA to narrate the ENTIRE EXCITING INCIDENT to his beloved kumudhavalli.

Kumudhavalli, before he started even, asked him as to why his face looked so bright, serene, divine and beaming that day.

He said “kumudhA, I have reached the purpose of my manushya janmam kumudhA. I have seen NARAYANA, kumudhA. (nAn kaNdu koNdEn NARAYANA). He was too excited to even complete his statements in a coherent manner. (After all, he has been initiated by SarvEswaran Himself!).

Kumudhavalli said, “Then, I have also reached the purpose of my deputation (by Lord through kapila muni)” and she narrated her story.

Our AzhwAr became all the more blissful and happier to know that The Lord Sriya: pathih sent Kumudhavalli only to set him right from his wrong path and corrected him.

He could not control his tears and sobbed heavily at the Lord’s mercy on him repeatedly .

His outburst of HIS BLISS was shared through HIS pasurams and visited almost about 86 temples . He also took efforts to construct Temple walls of Srirangam without affecting ThoNdaradippodiAzhwAr’s nandhavanam.

His pAsurams are marvellous; excellent and have unsurpassed beauty in them.

Being born into this body, a reservoir of profound sorrow, I am repenting, melting and crying, I am filled with pathos and self-pity;I have let myself run after beautiful women, seeking the sensual pleasures from their union; Through the grace of our Lord I have now realized that there is a greater goal and That will deliver me into eternal happiness; I have been searching for this state and have now found it IN THE SWEET NAME NARAYANA.

This pasuram will bring tears to the eyes of any Vaishnava for AzhwAr’sBhakti and love and his heart longing for the lotus feet of our Lord Narayana.
The clip was taken 2 years back during adiyens piligrimage
All glories to the devotees who will be attending the Thiruvedipuri Utsavam on  March 20 , 2019.
Adiyen Ramanuja dasan