Mutyala Harathi’,  is the last ritual performed during ‘Ekantha Seva’  to   Lord Venkateswara in Tirumala .

This seva  is symbolic  gesture of the Lord’s love for His devotees. 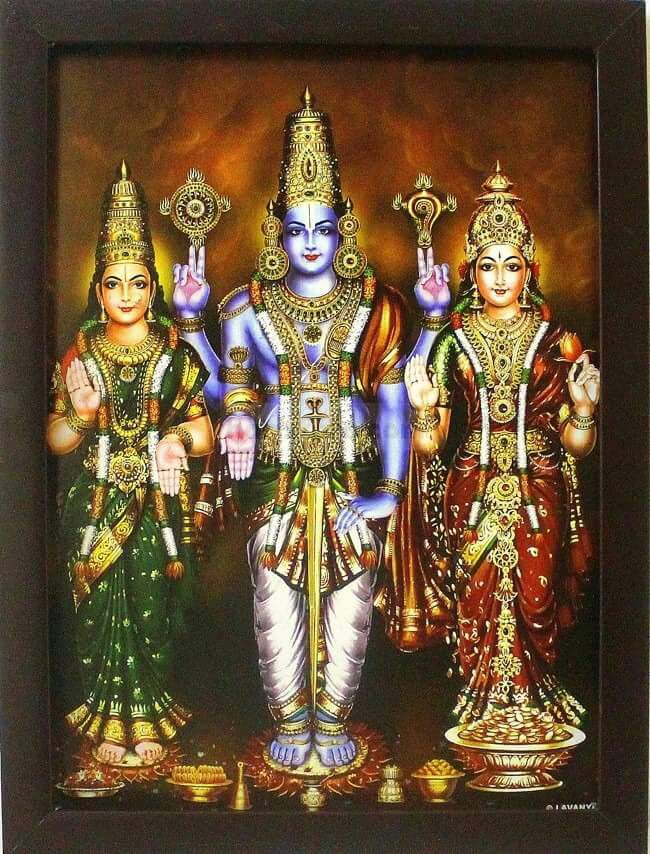 The ritual was started by saint-poetess Tarigonda Vengamamba and for almost  the last three centuries is being performed on par with ‘Lalipata’, ( Lullaby)  introduced by  another great devotee Sri Tallapaka Annamacharya….

Performing both the rituals during ‘Ekantha Seva’  to  the Lord is remembering these great devotees who had surrendered to Lord .

The speciality of   Ekantha seva  is  glorified  as….. 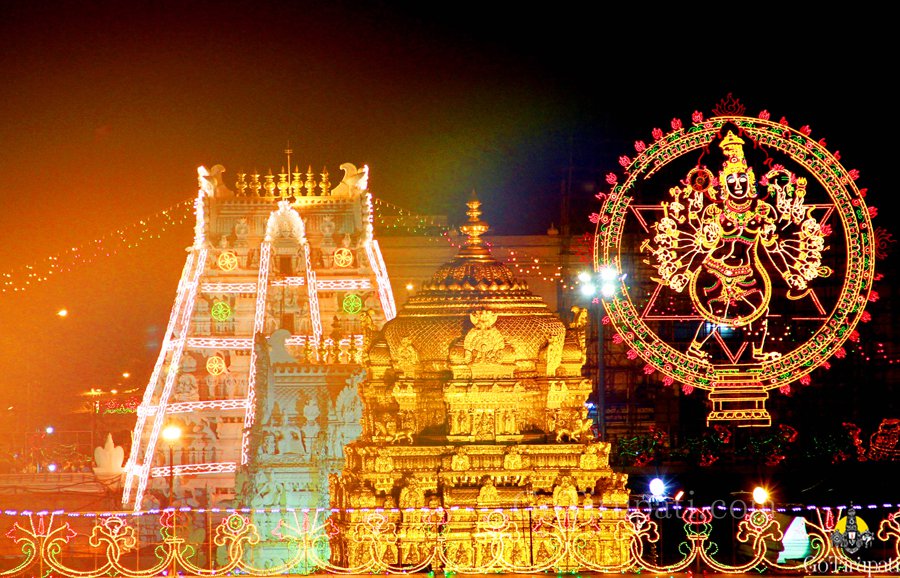 The meaning  of one verse of  the song  in English goes like this ..

To HIM who dwells on the Top of the Pannagadri Hills

To HIM who dispels the darkness of sin… 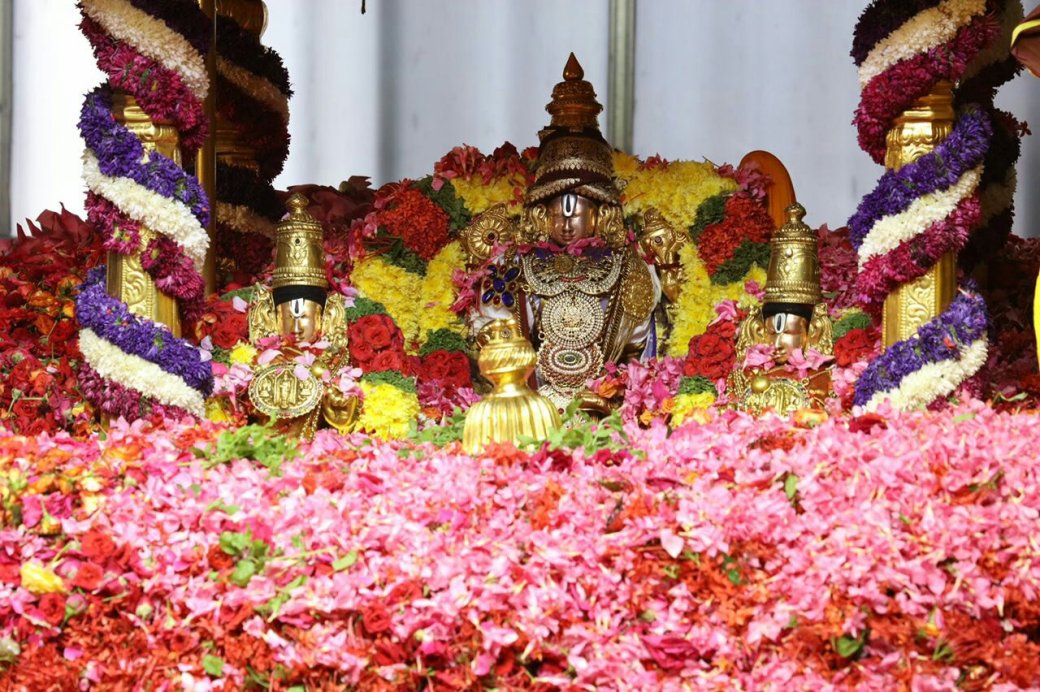 Along with this  mangala haarathi ,  the lullaby song composed by another great devotee Sri Tallapaka Annamacharya   is sung  which is relished by the LORD before he goes into Yoga Nidra ..

The great devotee Tarigonda Vengamamba  appeared at a place near chittoor  around the year  1750 and  was  serving   Lord Tarigonda Narasimha Swamy   . 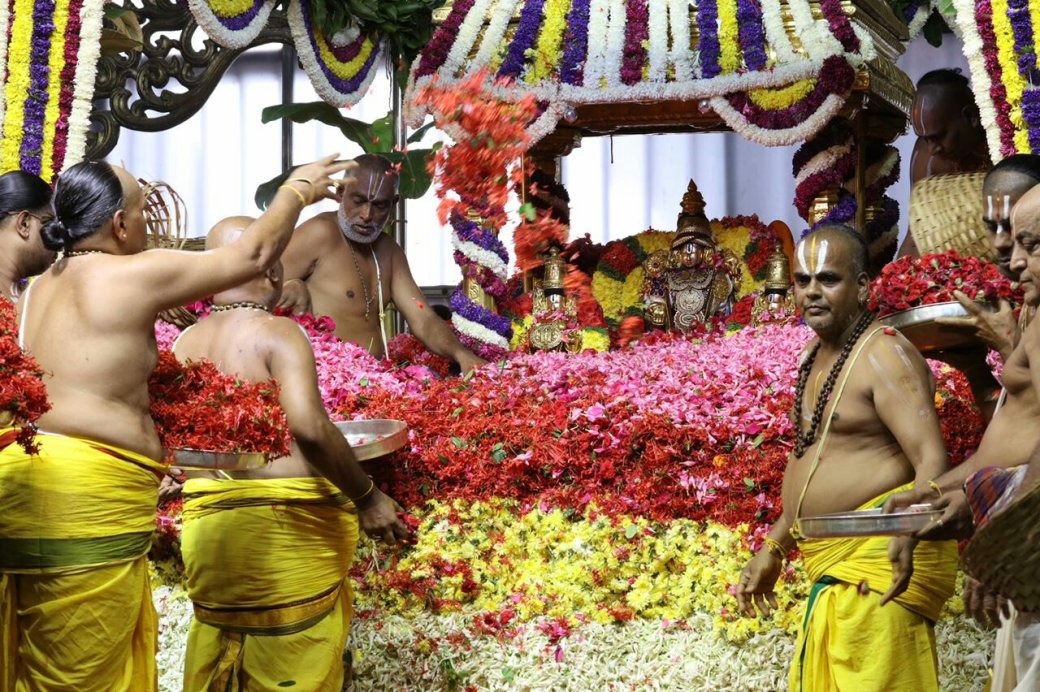 Their parents  admired her faith in Lord but had their own doubts about her future.Days rolled to months and months added to years.

The parents had mixed feelings of joy and fear in such situations as her devotion was going in leaps and bounds . 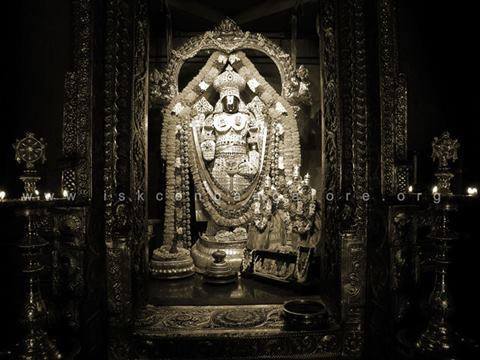 Due to divine will  Vengamamba   became a child-widow. But   with her strong upbringing and spiritual outlook , she  considered  Lord Venkateswara as her husband and  refused to part with the customary beliefs  of a married woman (Punya stree ).

With the blessings of Lord Narasimha of Tarigonda , she ascends  the  Tirumala  Hills and  starts  serving the Lordships with utmost devotion .

She stabilised  her stay at Tirumala and continued  with her divine service to Lord in solitude in the evenings .

As per temple legend, on the divine instructions of Goddess Padamavathi Devi, the then In-charge of Hathiramji Mutt, Mahant Sri Atmaramdasji  offered a small thatched hut in the present Rambhageecha gardens to Vengamamba.

The Saint Poetess used to perform penance under a tamarind tree present opposite her hut. 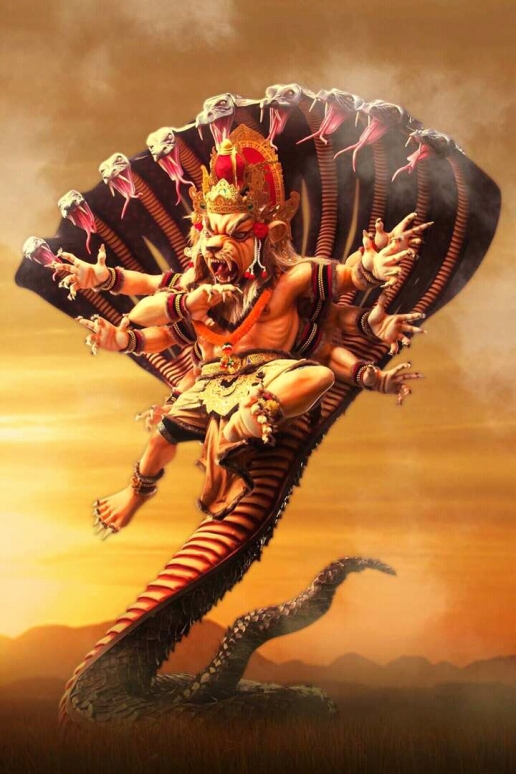 During every Nrisimha Jayanthi (which usually falls in the month of May) she used to serve mahaprasad to  scores of pilgrims who visited Tirumala during this period in the premises of her residence for ten days.

Seeing her charitable activity some devotees  donated  her “Dana Patras” (donations) between 1785 AD to 1812 AD with which she carried out her Annaprasada Vitarana till her last breath. Since then she became popular with the title “Matrusri” since she took care of the visiting pilgrims as a mother.

When she entered Tirumala  she initially  stayed at Gogarbha Teertham  and meditated on Lord .

But as flow of people  disturbed her spiritual practices ,  she shifted to Tumbura Teertham and continued her austerity. With constant attention on her devotional practices she moved to Tirumala.

She used to collect flowers  and make them as a garland and present it to Lord venkateswara every day .

One day as she offered Tulasimala to the deity  she  was criticized for her offerings by the main priest there (as a widow is not allowed to worship the temple deity  those days).

The Priest removes the garland away. But   Vengamamba could have darshan  of Lord  appearing wearing her tulasimala .

With all humility she starts   composing poems and literary essays on Lords divine leela . 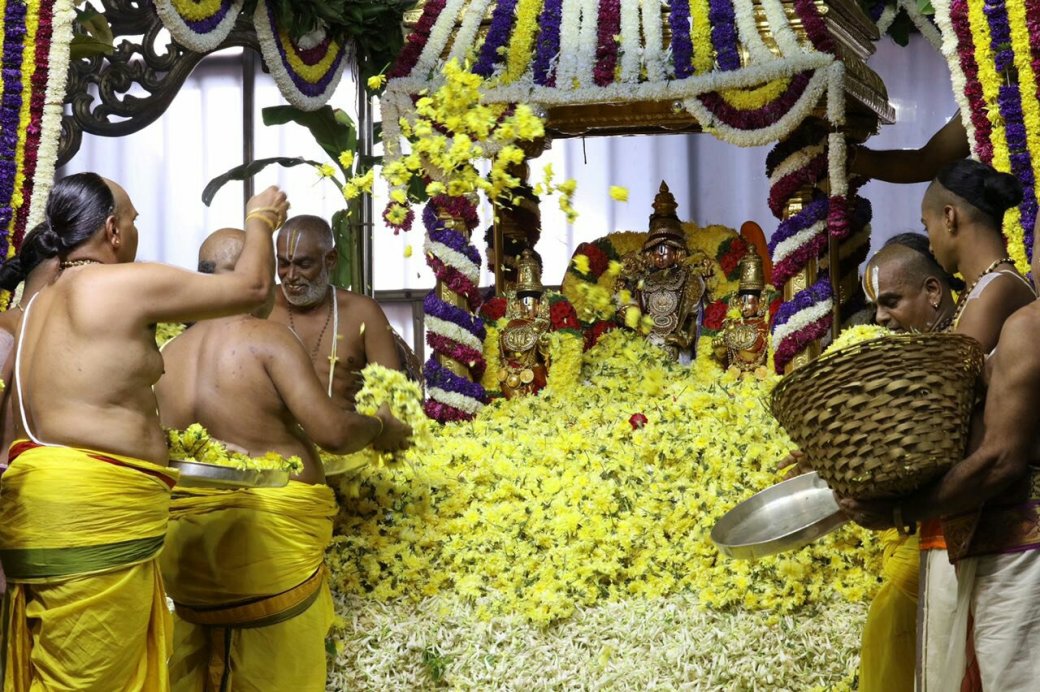 Moved by her devotion, it is told that Lord  allowed her to enter the temple after temple hours to listen to  her poems and songs.

Vengamamba  used to recite  poems in presence of the LORD  and  offered ‘harati’ to  the Lord each night along with  pearls as a mark of devotion .

Observing  the pearls in the sanctum sanctorum   over a period of time, the temple  priests were agitated . They politely informed that  Vengamamba must not be allowed to enter the temple .

She was under  exile in  a cave  at  Tumburakona near Tirumala .

The legend  reveals that LORD out of his love to his devotee  created a  secret pathway from the cave to the temple which was used by Vengamamba to continue her devotional service in private .

The practice of  night harati continued for 6 years.

Eventually, the priests realized their folly and recognized Vengamamba’s devotion and dedication, and  pleaded  her to return and  allowed to participate in Ekanta seva . 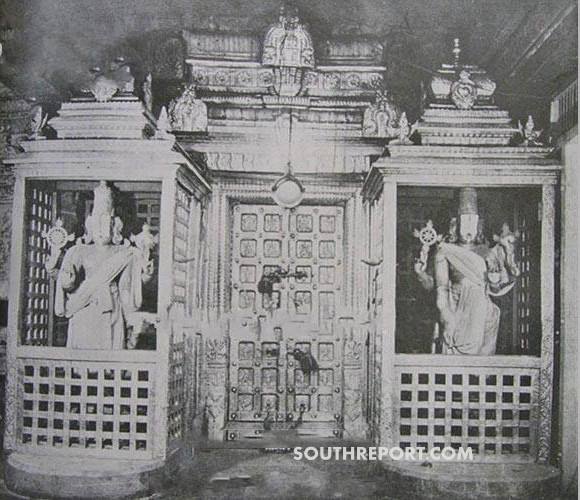 However , the divine services to LORD was generally offered by Mahants and  Priests inside the temple .

All of them felt  that though  she was a great devotee ,  a widow who was excommunicated by her community who doesn’t follow tenants of customs must not be allowed to continue such divine service  along with them which  is a serious  offense .

They told her sternly about their unhappiness and polluting the temple .

Vengamamba accepted their decision and continued to serve the LORDSHIPS at her house located in the Mada streets beside Sri Tallapaka Annamacharyas  descendant’s  house .

The next day happened to be the day of the car festival .

In all the splendor and glory the temple car with the LORDSHIPS moved .

However as soon as it reached Vengamambas house it stopped suddenly and any effort to pull the cart  was  becoming difficult . It was getting delayed . 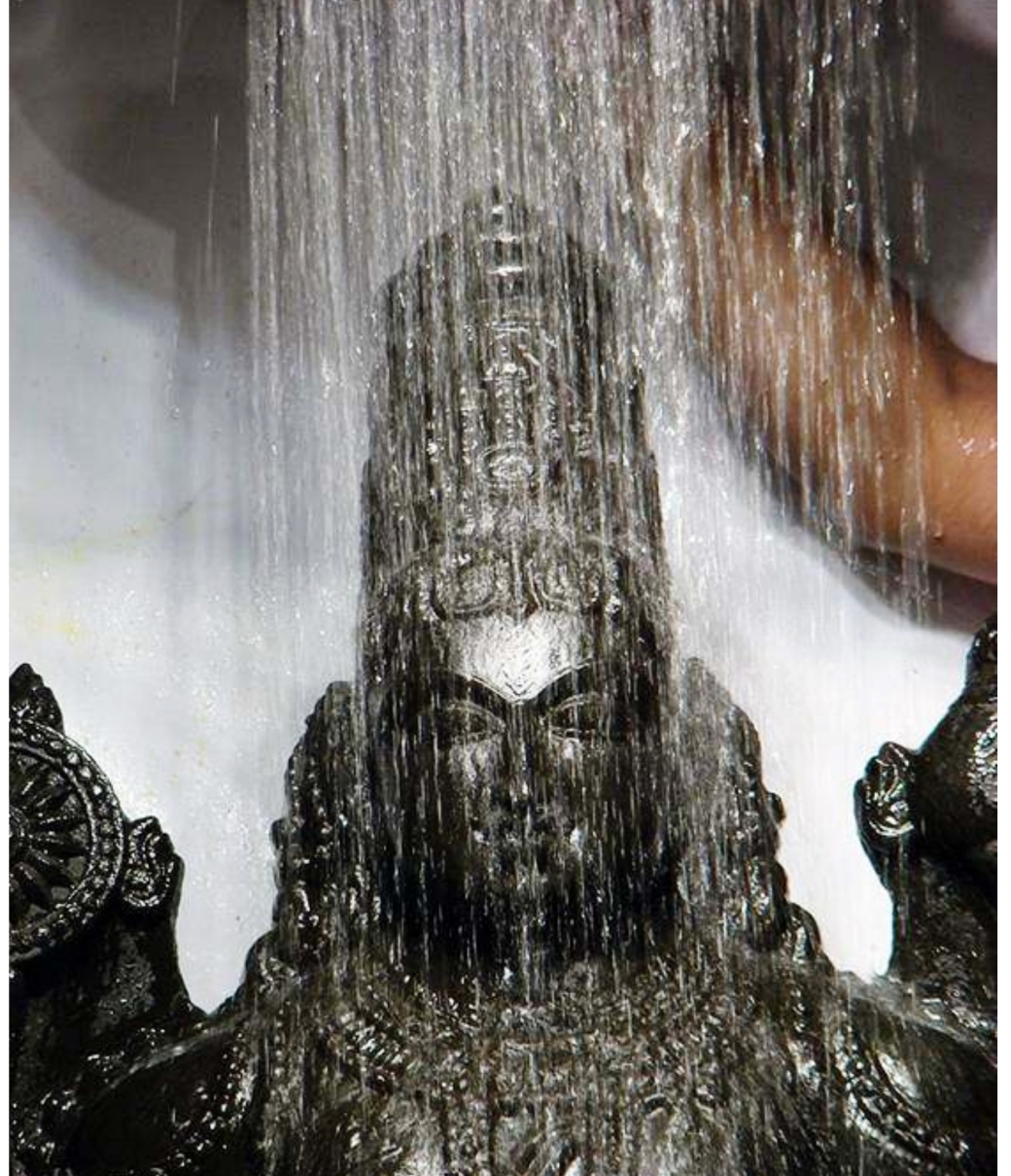 The Chief Priest understood the main motive of the Lord to ignore their plea . All of them rushed into Vengamambas house and begged repentance for their offence . They requested her to pray LORD for HIS approval .

Vengamamba rushed out with tears and all humility offered camphor harathi with devotion .

The temple car started moving slowly from then .

This camphor offering which was started by Vengamamba has come to be known as Tarigondavari Haarati OR Mutyaala Harathi which is continued even today .

A silver idol of Tarigonda Nrusimha Swami , fixed in a plate made out of an alloy of five metals is decorated with one of the ten incarnations of Mahavishnu with pearls mixed with vermillon and rice powder .

A small vessel placed at the middle of the plate with camphor is lighted and offered to the LORD everyday which becomes the last ritual of the day .

Every Car festival the camphor waving would be offered duly that comes as a token of remembrance of the great  devotee Tarigonda Vengamamba .

Pilgrims , even to-day, visit the Tulsi garden, offering  worship at the samadhi of Venkamamba, go round it, sprinkle water over their heads and feel gratified.
Full moon day in the month of Phalguna is considered an important day to bathe in the Thumbur Theertham about fifteen miles to the North of Sri Venkateswara temple.
Pilgrims go there on this  day in groups, bathe in the theertham and visit Sri Venkamamba’s cave.

Vayalpad is a village about nine miles from Tirupati. There is a temple named Tarikonda Sri Lakshmi Narasimha Swamy temple.

Those who have heard of Venkamamba visit this temple and worship her and get their wishes fulfilled and return happily.

Matrusri Tarigonda Vengamamba Jayanti  is celebrated   during the month of  May-June .

At Tirumala during the morning flowery tributes are  presented at Vengamamba Brindavana in Tirumala  and later in the evening   Lord Malayappa along with both consorts  come to Sri  Padmavathi Parinaya mandapam in the Narayanagiri gardens where unjal seva takes place. The  celebrations is  conducted  with  prominent music exponents singing sankeertans penned by Vengamamba.

All Glories to Mother Vengamaba.